Everest: Its Not About the Summit

Ellis James Stewart,John Weston Oct 13, 2021 Ellis James Stewart,John Weston
In 2014, Mount Everest was closed to all climbers after a devastating avalanche claimed the lives of 16 Nepali mountain workers ferrying loads up through the Khumbu Icefall on the mountain's southern approach through Nepal. Almost a year to the day later, in late April 2015, the mountain was once more rocked to its core after a large earthquake struck Nepal, sending shock waves rippling across the Himalayas. These ripples left a trail of devastation in their path causing, yet again, another avalanche to wreak havoc on the mountain. This time, 22 people lost their lives, in what would become the deadliest day in the mountain's history. Back in 2013, Ellis J. Stewart, a then 40-year-old from the UK, had but one goal: to climb the mountain. Something he had targeted achieving for over 20 years. This book is the author’s story of those endeavors during the two most devastating years in the history of attempts on Everest. Not every climber who goes to Everest succeeds; not every climber returns to tell the tale, but to return unscathed after such a large loss of life is a story to be told. This is that story. Everest: It’s Not About the Summit is a very honest account of a lifelong dream shattered in tragic circumstances. From the streets of northern England through to the valleys and high mountains of Nepal, Stewart shared his story with thousands of followers on social media, winning over the hearts and minds of many. A groundswell of support sent Ellis to achieve his dream, not once but twice. Nobody could have anticipated the events that would follow. Events that would define Stewart in ways he couldn't possibly have imagined. This book invites you into an intoxicating world - one where the margin between success and failure is brutally slim. This is a moving book with tragedy and commitment to a cause as a very central theme. It is a real story about real people. Whether it’s your usual genre of book or not doesn't matter, as it's basically a fantastic story. You don’t need to be a climber to enjoy this book, at all. It has universal appeal, and is a true inspirational cliff-hanger for all. This book should be in the audiobook collection of all - active and armchair mountaineers, alike. 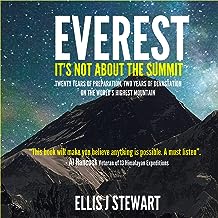 Book Title: Everest: Its Not About the Summit