E. E. O'Donnell Oct 13, 2021 E. E. O'Donnell
In 1912, Father Frank Browne SJ disembarked from the Titanic in Cork Harbour with the largest extant collection o pictures taken on board the ship during her maiden voyage. Some of these photographs of the liner and her passengers appeared on the front pages of the world's newspapers reporting the sinking of the ship a few days later, with the loss of over 1,500 lives. This volume relates the story of Father Browne's Titanic voyage, illustrated by photographs and memorabilia from his personal album - an invaluable archival treasure. The facsimile reproductions from that album, together with additional photographs, piece together the story of the great ship's voyage from Southampton up to her departure from Queenstown, her final port of call before disaster struck. Father Browne's first-hand account of his journey is included, along with some intriguing letters, such as correspondence from teh White Star Line and from fellow passengers. His poem, 'In Moriam', a menu card, telegrams, and press cuttings add further interest. The Foreword is by Dr Robert D Ballard, who discovered the wreck of the Titanic in its resting place in the depths of the ocean. 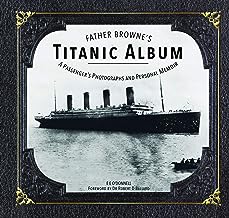